The World of Fashion

Manfred Thierry Mugler is the creator of the famous Alien perfume amongst others, but his career started in the world of fashion.

Mugler was born in Strasbourg, France.  As a young child he preferred to draw instead of concentrating on his education.

At the age of nine he began to study classical dance and at the age of fourteen he joined the ballet corps for the Rhin Opera.  At the same time, he began formal interior design training at the Strasbourg School of Decorative Arts.

At the age of twenty-four he was designing clothes for a Parisian boutique and by the age of twenty-six he was working as a freelance designer and began to design for a variety of large ready-to-wear fashion houses in Paris, Milan, London and Barcelona.

In 1973 Mugler created his first personal collection which was both sophisticated and urban. In 1978 he opened his first Paris boutique and at the same time launched a fashion collection for men.

During the 1980’s and 1990’s Mugler became an internationally recognised designer and his collections gathered much commercial success.  In 1992 he completed his first haute couture collection at the request of Chambre Syndicale de la Haute Couture. 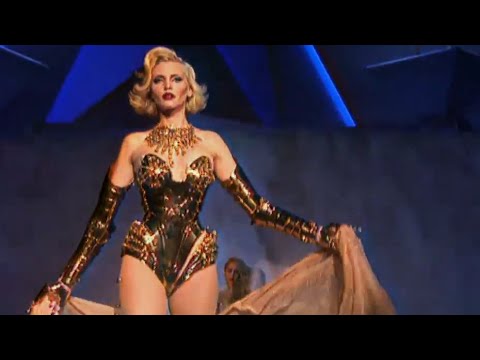 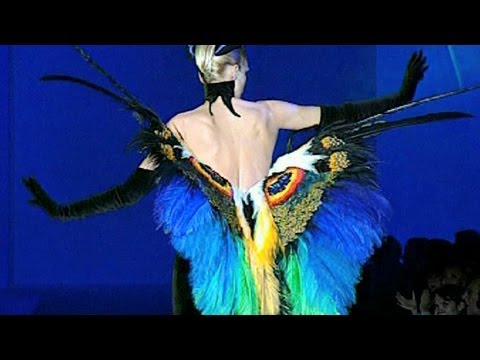 Amongst his various designs and collections Mugler also designed for celebrities including the famous black dress worn by Demi Moore in the 1993 film, Indecent Proposal.

Mugler also directs short films, advertising films and video clips.  He regularly designs costumes for musical comedies, concerts, operas and the theatre. He has worked with Robert Altman and George Michael. He directed the video for George Michael’s ‘Too Funky’ in 1992.  He also directed the first advertising film for one of his fragrances, Alien.

In 2008 the Mugler brand launched Thierry Mugler Beauty which was a high-end line of cosmetics and in 2009 Mugler worked as artistic director to singer Beyonce and created the costumes for her ‘I Am World Tour’.

Although Mugler retired from his brand in 2003 he made the exception to design under his name ‘House of Mugler’ for the Met Gala in 2019, and for one of his dear friends, Kim Kardashian.

Getting his inspiration from Sophia Loren in Boy on a Dolphin, Mugler envisioned a wet California girl and hence the wet couture dress was launched.

The first of Mugler’s perfumes appeared in 1992 and was called Angel.

Angel contains a combination of praline and chocolate mixed with a strong accord of patchouli.  It was part of a new fragrance group called gourmand.

The Angel bottle, a design in the shape of a faceted star, was created by the Brosse Master Glassmakers.  Fans of the fragrance include Diana Ross, Barbera Walters, Eva Mendes and Hillary Clinton.

In 1996 Mugler followed up Angel with a male version named Angel Men or A*Men.  This fragrance includes notes of caramel, coffee, vanilla, patchouli and honey.

In 2005 Alien was created, the second major Thierry Mugler fragrance.  In the same year Thierry Mugler launched the Thierry Mugler Perfume Workshops which are open to the general public and led by specialists of the perfumery and oenology world.

In 2010 the fragrance Womanity was launched by the House of Mugler.  This fragrance has top notes of chutney, citruses and green notes with middle notes of black fig, sea water and caviar and base notes of opoponax, immortelle, Virginia cedar and Vetiver.

Mugler’s newest fragrance, Angel Muse, was released in 2015 and Angel Nova was released in June 2020.  Before this in 2006 Thierry Mugler completed a project for the launch of the film ‘Perfume’ in collaboration with the IFF company and created a box set of fifteen compositions.

Thierry Mugler is diverse, creative and a genius.  He is openly gay and is a long-time body builder.  Since his departure from fashion, he has become notably reclusive.

He believed after he left the fashion industry that Thierry Mugler was a label, a brand, so he changed his name from Thierry Mugler to his original first name of Manfred.  He wanted to move on to other things and that he certainly did.